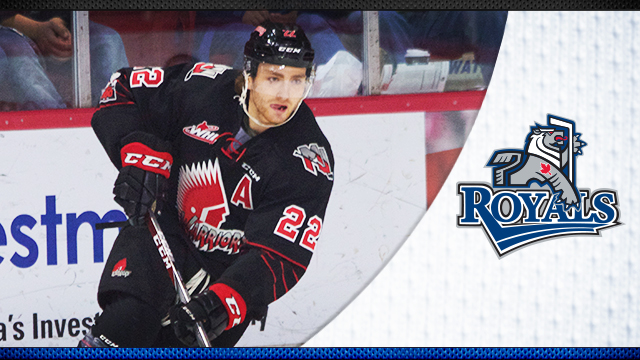 A native of Beaumont, AB, Gregor has recorded 36 points (14g-22a) in 30 games with the league leading Warriors.

Gregor was originally drafted by the Royals in the third round, 55th overall, in the 2013 WHL Bantam Draft. He was traded to the Warriors in 2014 in a deal that saw Victoria receive defenceman Travis Brown.

In November of this year, Gregor was a member of Team WHL as they took on Russia at the 2017 CIBC Canada/Russia Series.

Last season, Gregor finished fourth in team scoring with Moose Jaw as he registered 27 goals and 34 assists for 61 points in just 52 contests. During the 2015-16 season, Gregor tallied a career high 73 points (28g-45a) as he finished the year as the Eastern Conference recipient for the Rookie of the Year.

“We have some history with Noah, and we have watched him develop into an exceptional player in Moose Jaw,” President and General Manager Cameron Hope said. “We are excited to have him come back to Victoria and join our team.”
Gregor has also suited up for Hockey Canada as he was a member of the Under-18 team at the 2016 U-18 Hockey Championships.

The 1998-born forward has played in 164 career WHL games, all with the Warriors, where he has collected 176 points (71g-105a). Gregor also brings with him playoff experience as he has played in 17 career post-season games over two seasons with Moose Jaw and tallied 11 points (5g-6a).

Peckford, a product of Stony Plain, AB, was in his third season with Royals and had recorded 27 points (13g-14a) in 33 games.

“It is difficult when a player like Ryan leaves your team in a trade. Ryan and his family have been a part of our family since 2014,” Hope said. “We wish Ryan all the best. He is a very good player and a great young man. He was a true Royal, on and off the ice, during his time in Victoria.”
Peckford was selected by the Royals in the second round, 31st overall, at the 2014 WHL Bantam Draft.

Victoria is in action tomorrow night against the Prince George Cougars with puck drop scheduled for 7:00 p.m. Victoria will return home on Saturday, December 16th as they take on the Vancouver Giants in their last home game before the holiday break. Tickets can be purchased in person at the Select Your Tickets box office, over the phone by calling 250-220-7777, or online at www.selectyourtickets.com.

The Royals’ Holiday Combo is back. Give the gift of hockey and get a head start on your Christmas shopping by grabbing our festive ticket pack. Each $65 Holiday Combo includes four ticket vouchers valid for any 2017-18 regular season home game, plus a Royals’ coffee mug and an exclusive packet of “Marty’s Mix” hot chocolate – a $90 value. For full details call the Royals’ Ticketing Office at 250-220-7889 or email them at tickets@victoriaroyals.com.