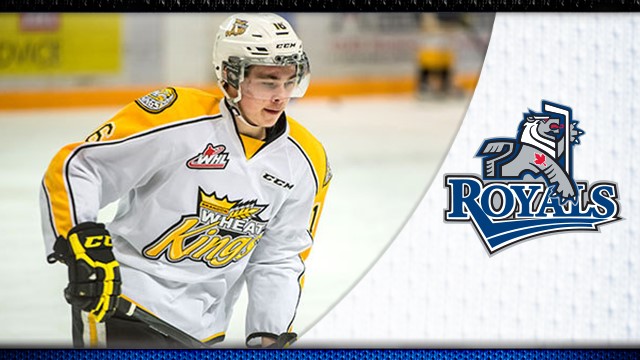 Victoria, BC – The Victoria Royals are pleased to announce that the club has acquired forward Tanner Kaspick (1998) and unsigned prospect Cameron MacDonald (2002) from the Brandon Wheat Kings. In exchange the Royals have sent a pair of first round picks (2019 & 2021) and unsigned prospects Jonathon Lambos and Ty Thorpe.

A native of Brandon, MB, Kaspick has recorded 37 points (11g-25a) and 43 minutes in penalties in 35 games for the Wheat Kings. In November, the 6-1, 206 lb forward was a member of Team WHL at the CIBC Canada Russia Series, where he collected one assist in two games.

“There are very few opportunities to acquire a player with Tanner’s skill, character and experience,” Royals’ President & General Manager Cameron Hope said. “He will be a great addition to our forward group, and we look forward to welcoming him to Victoria.”

Last season, the Brandon captain tallied 19 goals and 26 assists to go along with 75 penalty minutes in 49 games with the Wheat Kings.

During the 2015-16 season, Kaspick registered 30 points (12g-18a) to help the Wheat Kings capture the Ed Chynoweth Cup as WHL Champions. In 21 post-season contests he totaled 10 points (5g-5a) and 28 minutes in penalties. At the conclusion of the 2015-16 season he was named WHL’s Scholastic Player of the Year.

Internationally, Kaspick has represented Hockey Canada at multiple tournaments that include the 2016 Ivan Hlinka Memorial Tournament where he helped his country capture the gold medal.

The 1998-born forward was selected by the St. Louis Blues in the fourth round, 119th overall in the 2016 NHL Entry Draft. The Blues signed him to a three-year entry level deal this past October.

Kaspick was a second round draft pick, 25th overall, by Brandon in the 2013 WHL Bantam Draft.

This season, the product of Surrey, BC has tallied 36 points (22g-14a) in 20 games along with 14 penalty minutes for the West Valley Hawks of the British Columbia Major Midget League (BCMML). The 5-8, 162 lb forward has also taken part in four games for the Powell River Kings of the BCHL and has registered two assists.

The 2002-born forward was originally selected by the Brandon Wheat Kings in the fifth round, 96th overall, at the 2017 WHL Bantam Draft.

The product of Winnipeg, MB was selected by the Royals in the third round, 49th overall, in the 2016 WHL Bantam Draft.