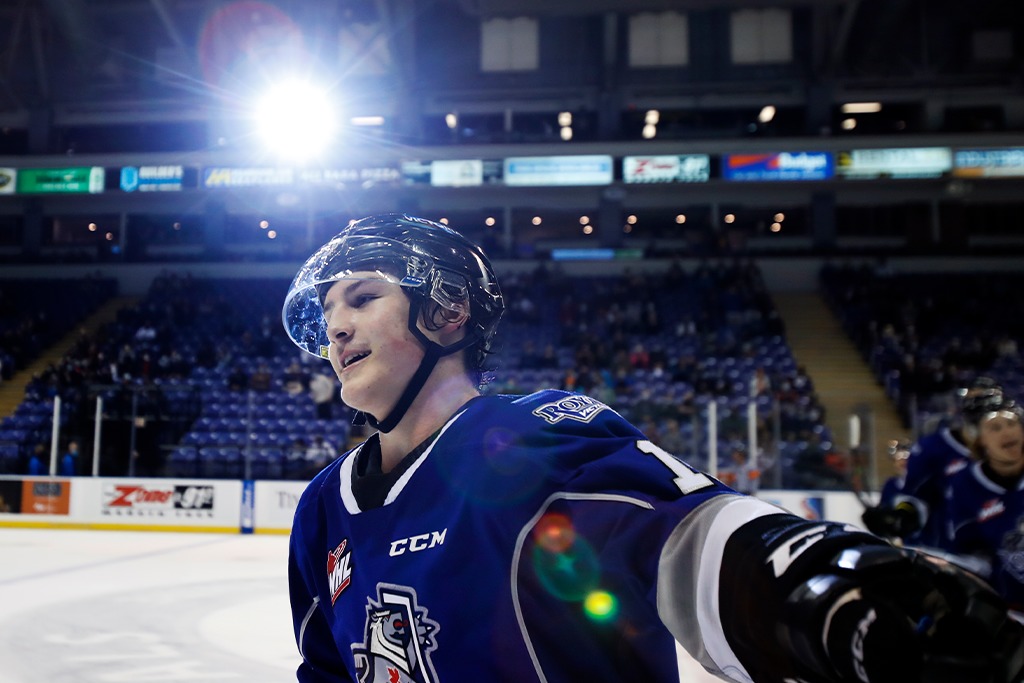 The Victoria Royals defeated the Kelowna Rockets 6-3 in the first of two games this Thanksgiving weekend.

It was a fast paced first period with the Rockets getting on the board first with a shot from Pavel Novak on a rebound from Royals goaltender Tyler Palmer at 9:03. After several close calls, the Royals got their first goal of the season from Carter Dereniwsky with two minutes left in the first to make it a tie game. Dereniwsky’s goal was assisted by Brayden Schuurman and Bailey Peach.

The Royals came into the second period hungry for more and quickly netted their second on a shot from Brayden Schuurman 45 seconds into the period with an assist from Bailey Peach. A turnover at centre ice at 10:37 led to a breakaway by rookie Anthony Wilson who scored his first WHL goal, putting the Royals up 3-1. Four minutes later, Victoria was up 4-1 after Brayden Schuurman scored his second of the evening with an assist from defenceman Luke Shipley. Seconds later, Riley Gannon with an assist from Tanner Scott made it 5-1 Royals. Despite the three quick Victoria goals, the Rockets kept coming and with two minutes left in period they made it 5-2 on a goal from Nolan Flamand. Their drive continued with 33 seconds left in the second when Pavel Novak scored his second of the game.

After an aggressive 40 minutes of play Royals goaltender Tyler Palmer was looking sharp in his first WHL start, allowing 3 goals on 36 shots. With three minutes left in the third period, Palmer made an incredible glove save to keep the Royals in the lead. In the final minute of the game, Brayden Schuurman got the hat-trick with his third of the night on an empty netter putting the Royals on top 6-3.

“He’s worked really hard to develop his game and put himself in those opportunities, earning those minutes,” Price said of Schuurman’s game. “He works hard to get those offensive chances and goes to the net to get them as well.”

Schuurman credited his teammates and goaltender for the Royals win.

“We played really well as a group. The goals happened to come tonight. They don’t always happen, but they came in a bunch tonight which felt really good,” said Schuurman. “Palms played unbelievably well. We know we can always count on him to make a big save when he needs to and he had a great game tonight.”

The Royals take on the Rockets again tomorrow at 7:05 p.m. for a special “Hocktoberfest” theme night at the Save-on-Foods Memorial Centre.  Tickets for both games are available on the Victoria Royals ticketing page.