Royals Win in OT Against Silvertips 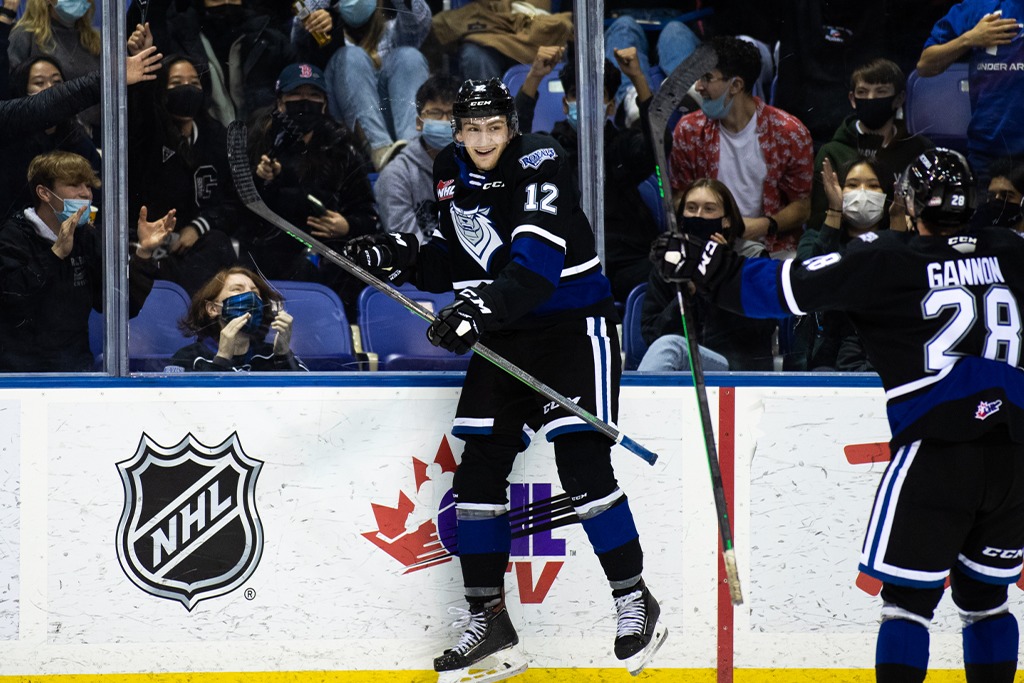 The Victoria Royals won their second in a row against the Everett Silvertips in a 4-3 overtime thriller at the Save-on-Foods Memorial Centre on Friday night.

Tonight marked the first time since the 2019-20 season that the Royals faced a U.S. opponent and the game got off to a quick start. The Royals got on board first with a goal from Evan Patrician on a centering pass from Reggie Newman and Kalem Parker. With eight minutes left in the period Royals goaltender Tyler Palmer made an incredible save on a one-timer that kept the Royals in the lead. However, a minute later Jacob Wright managed to get one above Palmer to tie the game at one.

Five minutes into the second period, Brayden Schuurman went hard to the net and got his eighth goal of the season to put Victoria up 2-1. The Royals almost had a third goal on the power play but had the puck shoved out by a Silvertips defenceman. Matthew Ng was quick to get the rebound for Everett to tie the game up at two. With eight minutes to go in the second period the Silvertips looked as though they had taken the lead, but on the Royals challenge the play was ruled offside and the period ended in a tie.

The Silvertips opened the third period with a goal from Niko Huuhtanen that went right between Palmer’s pads to give them the lead for the first time in the game. With just under five minutes to go Evan Patrician scored his second goal of the game with an assist from Reggie Newman and Gannon Laroque to tie it up at three. As neither team was able to get on board in the final minute of regulation, the game went into overtime. With under a minute played, Tarun Fizer and Gannon Laroque made a quick pass over to Bailey Peach who scored his fourth of the season to win the game

“It’s a very special moment for me. I told the boys in the room – I’ll remember that goal and that game for my whole life,” Peach said of his 200th CHL game. “To beat the top team in the CHL is unbelievable too and I’ll remember that forever.”

The three stars of the night were Tyler Palmer, Evan Patrician and Olen Zellweger.

“We look at it this way every game; We’re zero and zero and so is the team that we’re playing. This is a one game series and that’s the approach we took tonight,” said GM and Head Coach Dan Price. “We really have taken that approach here as we head into November. We’re looking at it as a brand-new start to the season.”

The Royals are heading on their U.S. road trip on Tuesday where they will face the Spokane Chiefs. The next Victoria home game will be December 11th for the Royals Island Bowl. For tickets to the Island Bowl, visit the Victoria Royals ticketing page or call the Select Your Ticket box office at 250-220-7777.