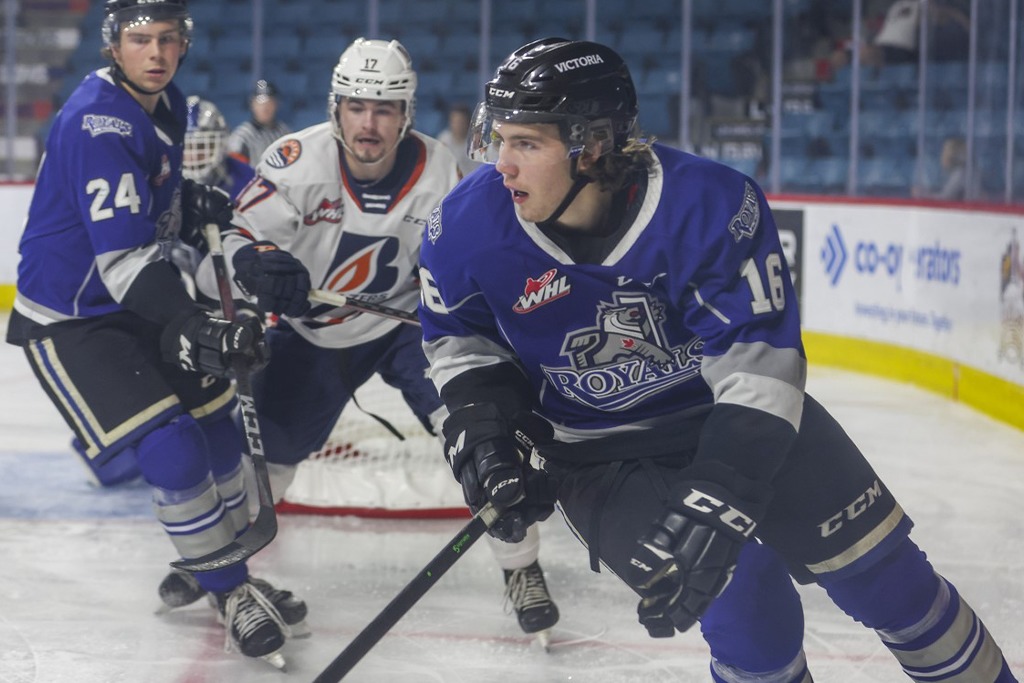 Forward Carter Dereniwsky scored at the 3:42 mark of the third period to lead the Victoria Royals to a 3-2 victory over the Kamloops Blazers in their final preseason exhibition contest on Wednesday night.

Teammate Marcus Almquist also had a big night for Victoria, tallying a team-high two points on a goal and an assist, while forward Teague Patton wrapped up an impressive exhibition schedule with his fourth goal of the preseason.

Two goalies made an appearance in net for the Royals in the win, with Tyler Palmer saving 18 of 19 shots through the first period-and-a-half, and Campbell Arnold stopping 21 of 22 to close out the game.

“Tonight’s game was up and down for us. It was a scrambly start, and our second period was not acceptable and was way below our standard,” said General Manager and Head Coach Dan Price. “But, in the third period the players regrouped and pushed hard. The levels of speed and intensity increased, as did the overall compete level, and the result was one of our best periods of the pre-season. Rest and recovery will be important now before we begin an important week of preparation for our home opener versus Spokane on Friday, September 23rd at the Save-On-Foods Memorial Centre.”

Defenceman Aapo Sarell and Kaden Hammell recorded the two goals for Kamloops in the loss, while starting goalie Michael Schnattinger made 22 saves on 25 shots.

Victoria would bounce out to a 1-0 lead late in the first period on a Marcus Almquist goal at 16:35. Defenceman Anson McMaster and forward Carter Briltz would count assists on the goal.

The Royals would then open up a two-goal advantage with a goal by Teague Patton at 0:27 of the middle stanza, with defencemen Luke Shipley and Kalem Parker each counting an assist.

However, Kamloops would respond a few minutes later with a goal by Aapo Sarell at the 2:51 mark of the second to cut the Victoria lead to 2-1.

The Blazers would then tie the game at 12:31 of the same period on a goal by Kaden Hammell, where it would remain until the 3:42 mark of the third when Victoria forward Carter Dereniwsky made it 3-2 with the eventual game-winner, with Marcus Almquist collecting his second assist on the goal.

The Royals wrap up their preseason schedule with a record of 3-1 after recording wins over the Prince George Cougars, Vancouver Giants and now the Kamloops Blazers following tonight’s win. Their only defeat came in a tight 5-3 contest against the Kelowna Rockets on Tuesday night.

Victoria will now take eight days off to prepare for their season opener against the Spokane Chiefs on Friday, Sept. 23 at the Save-On-Foods Memorial Centre in Victoria. Tickets are available at selectyourtickets.com.