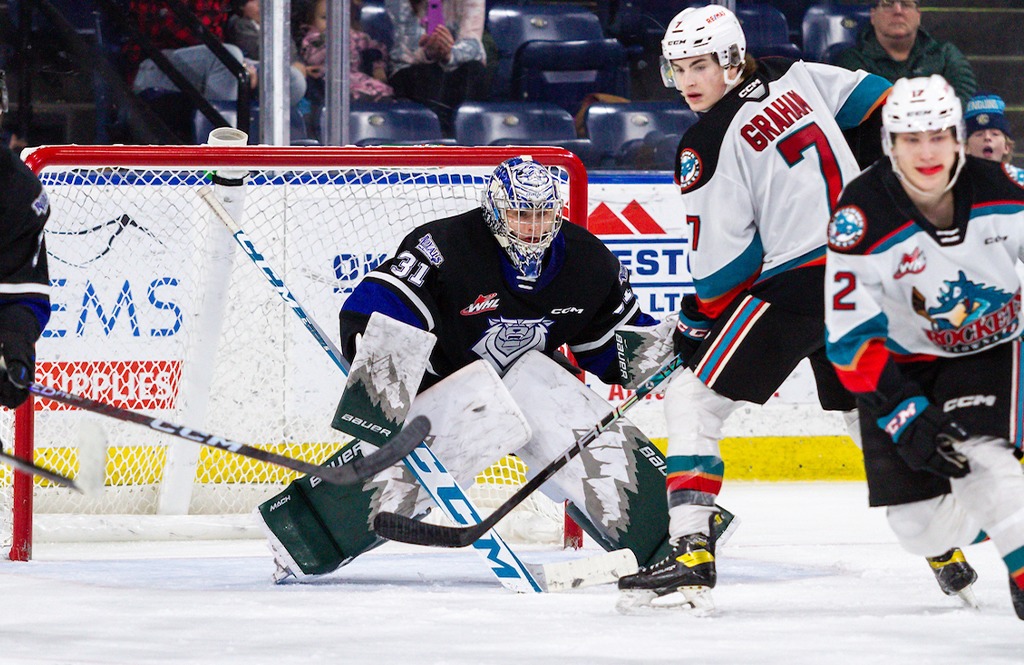 Forward Reggie Newman recorded two points on a goal and an assist to lead the Victoria Royals to a 5-1 win over the Kelowna Rockets at Prospera Place on Sunday.

The victory moves the Royals into a tie with the Rockets for the eighth and final playoff in the Western Conference with just 23 games remaining in the schedule.

Victoria also benefited from a multi-point performance by Kalem Parker, who picked up two assists, while starting goaltender Braden Holt made 13 saves on 14 shots on the way to recording his sixth win in a Royals uniform.

Meanwhile, defenceman Jackson DeSouza collected the lone goal for the Rockets on Sunday, while goaltender Talyn Boyko stopped 26 of 31 shots faced in the loss.

Victoria (13-27-4-1) forward Teydon Trembecky (4) would open the scoring with his second goal in as many games, coming at the 16:41 mark of the first period. Defenceman Kalem Parker would count the lone assist on the play.

The Royals lead would then grow to 2-0 on a goal by forward Marcus Almquist (9) at 18:33 of the first, with Parker and defenceman Justin Kipkie on the assists.

Forward Robin Sapousek (2) would add another for Victoria in the final minute of the first, taking a cross-crease pass from linemate Reggie Newman at the 19:35 mark to give the Royals a 3-0 advantage heading into the second.

The goals would keep coming for Victoria as forward Jake Poole (25) scored at 8:16 of the second to bring the score to 4-0.

Poole extended his scoring streak to seven games with the goal. He has recorded 14 total points on four goals and 10 assists over that span.

Forward Alex Thacker and defenceman Jason Spizawka would record assists on the play.

The Royals would then take a 5-0 lead on a goal by forward Reggie Newman (7) at the 19:35 mark of the second, with forward Teague Patton and defenceman Luke Rybinski on the assists.

The shutout would finally be broken on a goal by Kelowna (14-25-3-0) defenceman Jackson DeSouza (5) at the 16:54 mark of the third, bringing the score to 5-1, where it would remain at the final buzzer.

Looking ahead, the Rockets will reset for a road contest against the Vancouver Giants this Friday in Langley.

Meanwhile, the Royals will return home for a pair of contests against the Kamloops Blazers next weekend, with puck drops set for 7:05 pm on Friday, Jan. 27 and 6:05 pm on Saturday, Jan. 28 at the Save-On-Foods Memorial Centre in Victoria. Tickets are available to both games at selectyourtickets.com.