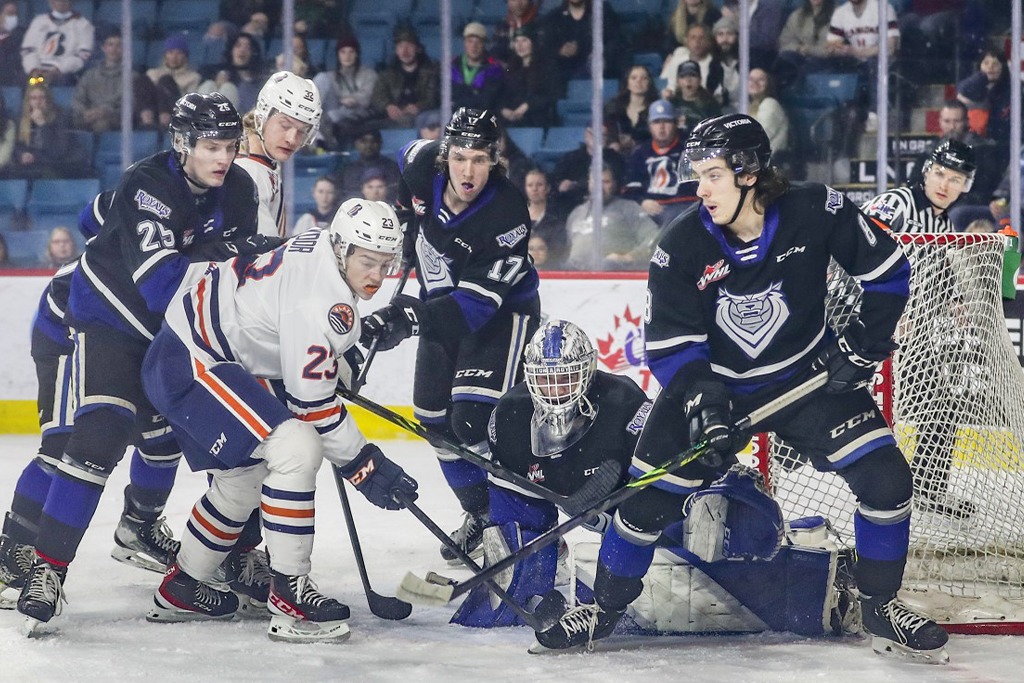 The Coquitlam, BC product would count two points on the night, bringing his season total up to 56 (25 goals, 31 assists).

Despite Seminoff’s heroics, teammate Logan Stankoven would end up being the top scorer for the Blazers on Friday, counting three assists and bringing him up to 99 total points (42 goals, 57 assists) in 2021-2022.

Starting goalie Dylan Garand also had a solid night, stopping 17 of 20 shots against.

Meanwhile, 21-year-old forward Bailey Peach was the top performer for Victoria in the loss, counting two goals and an assist to bring his total up to 77 points (36 goals, 41 assists) on the season.

Forward Brayden Schuurman also had some quality minutes for his side, recording a goal and an assist, while teammate Riley Gannon contributed with a pair of assists.

The loss brings Victoria’s record to 22-37-5-1 (50 points) as they remain in a tie for seventh place after failing to pick up a point.

Meanwhile, the win improves Kamloops’ record to 47-16-2-0 (96 points). They remain in second place in the West, having already clinched a playoff spot and first place in the BC Division.

Kamloops took only a few minutes to open the scoring, with forward Quinn Schmiemann netting his 13th of the season at 4:09 to open up an early 1-0 advantage for his team.

However, the Royals would respond in the latter half of the frame, tying the game on the back of a powerplay goal by forward Brayden Schuurman (29) at the 13:18 mark.

With 29 goals, Brayden Schuurman holds sole possession of 2nd for most goals by a 17-year-old in Royals history 🙌#ReturnOfTheRoar #VICvsKAM pic.twitter.com/TEzQ1lHTSa

The back-and-forth action would continue in the second as the Blazers retook the lead on a Fraser Minton goal (20) at 5:16. Victoria would respond again, with forward Bailey Peach scoring his 35th of the season to tie it at 2-2 at the 12:21 mark, setting the table for a dramatic final period.

Kamloops would take the lead for the third time in the contest at 6:51 of the third with a goal by Caedan Bankier (19).

A strange sequence of events would ensue in the minutes following the goal, as the Blazers appeared to score on two separate occasions, but both would be called no goal despite Kamloops’ best pleas.

Bailey Peach then added to the drama by netting his second of the game and 36th of the year to tie it at 3-3 at 12:32 of the frame, setting up some tense final minutes.

A tripping minor taken by Kamloops defenceman Logan Bairos at the 17:55 mark pushed the momentum fully into the Royals favour, however, a turnover leading to a two-on-one opportunity in the final seconds would ultimately prove costly as Blazers forward Logan Stankoven found teammate Matthew Seminoff who sniped one home with just four seconds remaining on the clock to stun their opponent and give his team the 4-3 victory.

Kamloops will remain at home for their final three games, playing host to the Portland Winterhawks for their next contest on Saturday night.

Meanwhile, Victoria will travel north to Prince George for a crucial Saturday night contest with the Cougars, who sit just a single point behind the Royals in ninth place. Tomorrow’s result could go a long way to determining the final playoff picture in the conference.

Puck drop for that game is set for 7:00pm at the CN Centre in Prince George.

The Royals next set of home games will be Apr. 15 and 16 against the Spokane Chiefs. Friday’s contest will be a Superhero Salute where the Royals will recognize local heroes and frontline workers.

The game on the 16th will be an opportunity for fans to celebrate Marty’s Belated Birthday and Senior Night where we honour our 20-year-old players.