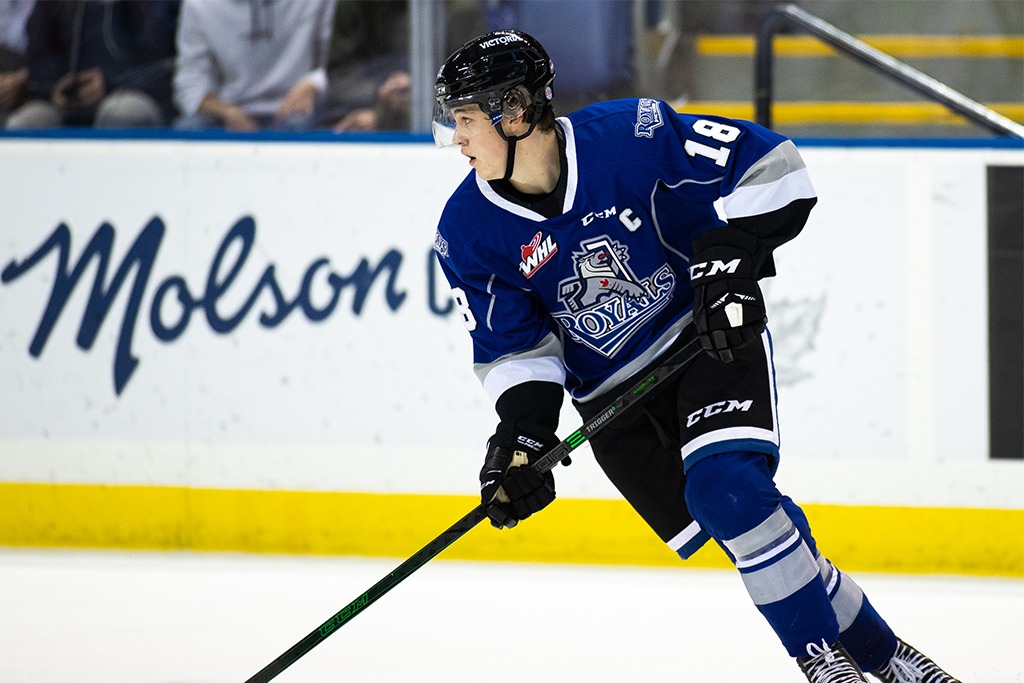 Coming into his final Royals training camp, Tarun Fizer knew there was a chance he may not finish his final year in Victoria.

A few months earlier while he was doing his off-season workouts Calgary, Fizer’s agent had called him with some news.

“My agent called me a few days before the NHL Draft in June and told me that the Colorado Avalanche wanted to sign me to an ATO if I went undrafted, which I did. Pretty much right after they sent the papers, I signed them and we made it official,” Fizer explained. “The very first thing I did was call my mom and she was so excited. Then I rushed home to tell my dad and my sister. It was just really exciting.”

Fizer left Victoria at the beginning of September so he could be part of the Avalanche’s rookie camp in Colorado. It was a dream come true for the 20-year-old to be given the opportunity to play at the next level.

“Putting on the Avalanche jersey was special. Despite it not being a real NHL game, putting on a jersey that represented an NHL team with my name on the back was really cool,” Fizer said.

While with the Avalanche, not only did Fizer get to meet his heroes like Gabriel Landeskog, but he also got to witness first-hand the way NHL players prepare themselves each and every day.

“They’re very focused. They spend a lot of time at the rink even on game days getting themselves in the right mindset and taking care of their bodies.”

After playing in two games for the Avalanche during rookie camp, Fizer signed an ATO with the team’s AHL affiliate, the Colorado Eagles on October 4th, 2021.  The 5’11 one-hundred and sixty-pound right winger played in one game for the Eagles before he was re-assigned to the Royals.

“The opportunity to sign an ATO with the Eagles was a very cool experience. I learned a lot and they were a great team to be around. Just a great group of guys,” Fizer said of his AHL experience. “It was definitely a faster paced game than what I’m used to, but I can’t wait to get back there and excel at that level.”

The Royals were happy to have their captain return after a tough start to the season. While no one knew when he’d be rejoining the team, they were elated when they got the call and so was Fizer.

“When I found out I was coming back to Victoria I was very excited. I’ve played all five years with the Royals and I love playing here,” Fizer said. “One of the first things I thought about was how loud the fans are in Victoria and I couldn’t wait to play in front of them again.“

In his final year as captain, Fizer is looking to finish out the year strong and hopefully sign a contract with a team in the NHL, but not before he leads his team through the 2021-22 season.

“The Royals organization has helped me grow over the last four years and so I’ll be doing that for our young players again this year,” added Fizer. “It’s a big goal of mine to show them how to prepare themselves at the pro level and help them get to where they need to be. I’m really just looking forward to continuing to grow my career so I can get to the next step.”