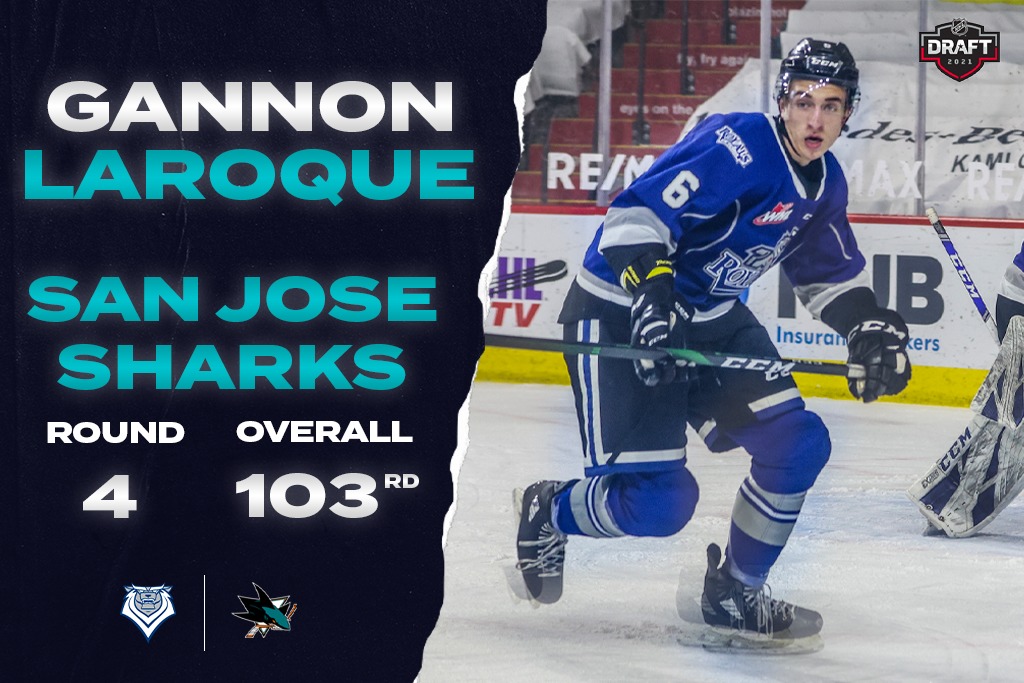 The defenceman was drafted 103rd overall

Victoria, BC – The Victoria Royals are proud to announce Gannon Laroque was drafted in the fourth round, 103rd overall to the San Jose Sharks in the 2021 NHL Draft earlier today.

Last season, the 17-year-old became a top defenceman for the Royals, logging the most minutes played among all Royals players.  Weighing in at 6’2” and 196 pounds, Gannon became the physical playmaker the team needed in the RE/MAX BC Division Hub Centre.

“We’re incredibly proud and happy for Gannon today,” GM and Head Coach Dan Price said. “He has incredible work ethic, moves the puck well and is extremely physical.  He has a bright future ahead of him.”

Gannon, who has been with the Royals for the last two seasons, received the Royals Top Defencemen Award presented by Wilson’s Transportation for his outstanding play last season.

“This is a dream come true for me. I’m excited and grateful to the Sharks organization for selecting me and giving me an opportunity. I’ve wanted to play in the NHL since I was a first year Novice player and I recognize that being selected by San Jose is just the next step towards my ultimate goal of becoming a full time NHL Player. My work towards that goal continues tomorrow.”

“I’m grateful for the opportunity to develop with the Royals who have allowed me to immerse myself in hockey and become a student of the game,” Gannon said.  “I’m looking forward to getting back to Victoria to work with my teammates and am excited to work with the Sharks to get to my goal of playing in the NHL.”

Gannon is the 11th Victoria Royals player to be drafted in the last nine years.