WHAT YOU NEED TO KNOW – ROYALS vs. BLAZERS THIS WEEK 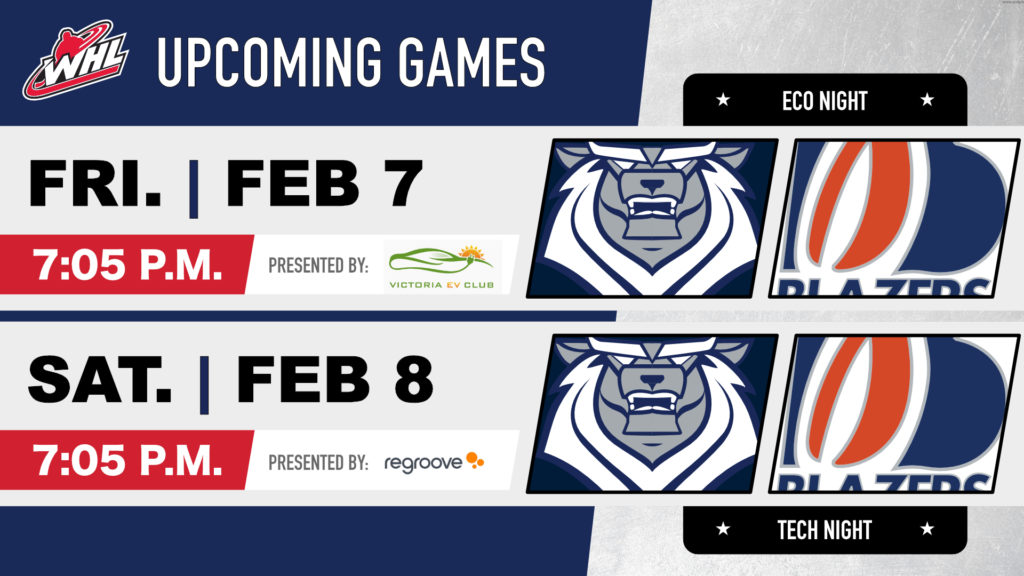 Giveaways:
• Friday – Join the rEVolution! Upon arrival, the first 2,000 fans will receive a seed paper air freshener courtesy of the Victoria EV Club. The air freshener is handmade from recycled fibers and is embedded with seeds and organic oils. After the scent is gone, plant it to grow colourful wildflowers. Royals’ Ticket Pack Holders including Season Tickets, Half-Season Tickets and Fan Pack holders will have first access to the air fresheners from 6:00-6:30 p.m. when they show their Gift & Giveaway Card.
• Friday – Fans are encouraged to visit the Victoria EV Club for their chance to win two 24-hour Teslas experience and either a scale model of a new Tesla Roadster or a scale model of a new Tesla Model S.
• Saturday – Molson Coors will be giving away free full-sized Coors Original samples at two stations located around the arena concourse. Fans are limited to one full-sized sample per person and must be 19 years of age or older with a valid government issued ID. Pepsi will be on hand with samples of Blackberry and Lime Bubly for non-beer drinkers and those under the age of 19. Samples will only be available until the end of the first period, while supplies last.
• Saturday – Fans will have the opportunity to win a Lenovo Chromebook C330 computer, valued at $400, when they visit the Regroove table at Gate 1.

Pre-Game:
• Friday – Eco friendly vehicles will be on display around the arena concourse throughout the game from Kia of Victoria, Tesla Tours, Campus Nissan, Motorize, Current Taxi, Audi Victoria, Tesla, Farmer Construction and Wheaton GMC.
• Friday – As part of the “WHL Officiating Experience” initiative a group of BC Hockey minor officials will line-up with the game’s WHL officials for the anthems.
• Saturday – Fans attending the game will have the chance to watch a live Esports tournament hosted by Esports Victoria and members of the Victoria Smash Club. From 5:00 p.m. onwards, members of the Victoria Smash Club will be participating in a Super Smash Bros. Ultimate & Melee Tournament throughout the concourse. Spectator entry is valid with purchase of a February 8th game ticket. For more information and registration details on the Esports tournament visit The Victoria Smash Club’s Facebook page at bit.ly/2OlurR5.

Tickets:
• Join the Royals’ family with two new mini-ticket packs. The Super Smash Pack starts at only $45 and includes tickets to Saturday’s game, Skate with the Players on March 1st and a pair of Royals’ wireless headphones. The Stretch Run Pack includes Saturday’s Tech Night, Skate with the Players on March 1st, WHL Suits Up to Promote Organ Donation Presented by RE/MAX on March 13th, and a collectible Kaid Oliver bobblehead at the starting price of $55.50. For more details call the Royals ticket office at 250-220-7889, send an email to tickets@victoriaroyals.com, or visit www.victoriaroyals.com.