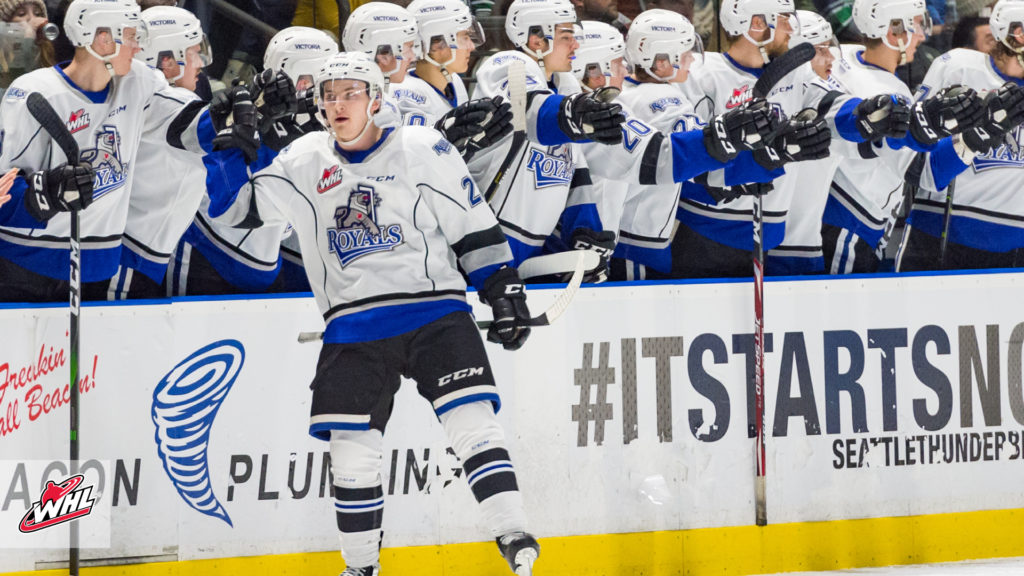 Wednesday’s Western Hockey League action saw five games on the slate with three games south of the 49th parallel. The road teams claimed two of those victories as the Victoria Royals and Saskatoon Blades each doubled up the Seattle Thunderbirds and Tri-City Americans; respectively. In Everett, the home side dominated once more as Dustin Wolf delivered the 15th shutout of his WHL career in a win over the Spokane Chiefs. The Lethbridge Hurricanes took over top spot in the WHL’s standings after topping the Regina Pats in southern Alberta. Over in British Columbia’s interior, the Kamloops Blazers remained hot at home, taking down the visiting Edmonton Oil Kings in a rare cross-conference meeting. 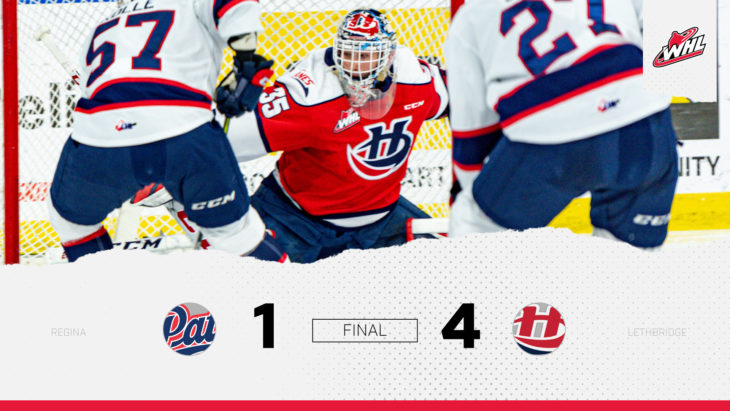 Dino Kambeitz scored twice and Dylan Cozens (Buffalo Sabres) scored once as part of a three-point night as the Lethbridge Hurricanes downed the Regina Pats 4-1 Wednesday.

The first goal of the game didn’t come until 11 seconds past the halfway point in regulation as Kambeitz struck for his first of the game. Fans then had to wait until the third period for the next goal as Kambeitz notched his second of the game 4:34 into the final period.

Zack Smith would cut the deficit in half late in the period, but an insurance goal from Cozens and an empty-net goal from Oliver Okuliar closed out the contest.

Carl Tetachuk stopped 25 of 26 shots to earn the win for Lethbridge. 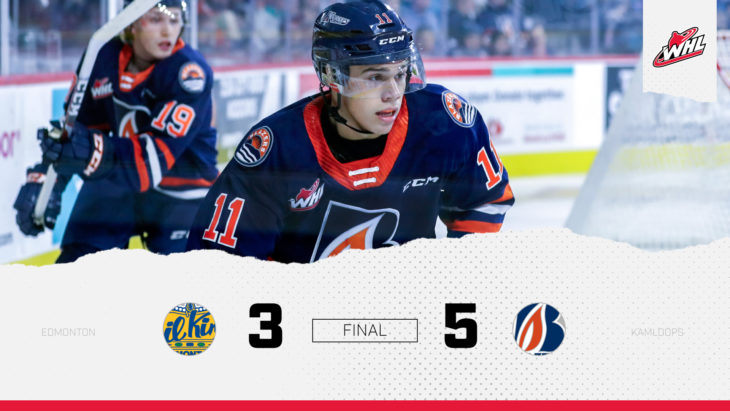 The friendly confines of the Sandman Centre boosted the Kamloops Blazers once more as they downed the Edmonton Oil Kings 5-3 to earn their eighth-straight home win Wednesday.

Logan Stankoven scored the first and last goal of the game while Brodi Stuart notched the game-winning goal early in the third.

Stankoven’s goal put the Blazers up in the first, but Edmonton came back with goals from Ethan McIndoe and 2020 NHL Draft prospect Jake Neighbours to lead 2-1 through 20 minutes. David Kope extended the lead to two in the second, but Montana Onyebuchi and Max Martin struck back to even up the game through 40 minutes.

The Blazers would press ahead from there, receiving the aforementioned goals by Stuart and Stankoven to close out the win. Josh Pillar collected three helpers in the win. 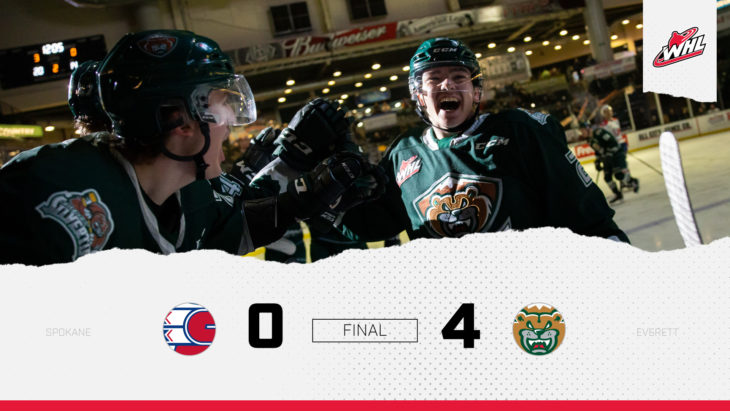 A 26-save shutout from Dustin Wolf (Calgary Flames) and a three-goal third period powered the Everett Silvertips to a 4-0 win over the Spokane Chiefs Wednesday.

Wolf stopped seven shots in the first, 14 in the second, and five in the third for his league-leading fourth shutout this season and the 15th of his WHL career.

Gut finished with a three-point game and Seeley had a multi-point night in the win. 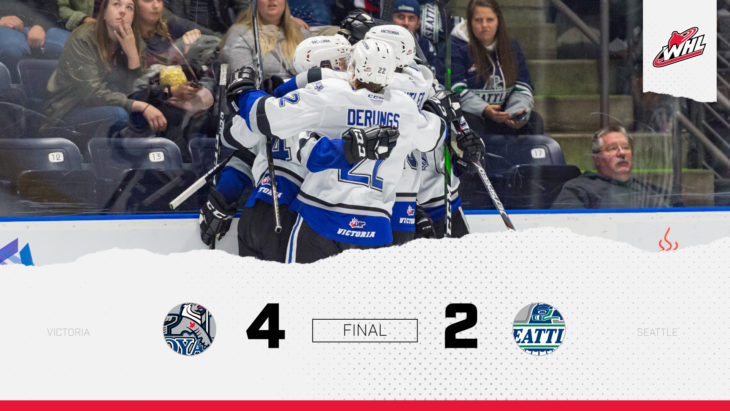 The Victoria Royals doubled up the Seattle Thunderbirds 4-2 Thursday to begin a three-game road trip through Washington state.

Matthew Rempe put the Thunderbirds ahead early on, but Keanu Derungs answered back to keep the teams tied through 20 minutes.

In the second, Gary Haden scored twice, bookending a goal by Seattle’s Kai Uchacz to make it a 3-2 game in favour of the visitors. Tarun Fizer closed out the game with an empty-net goal in the third.

Between the pipes, Shane Farkas stopped 24 of 26 shots to earn the victory. 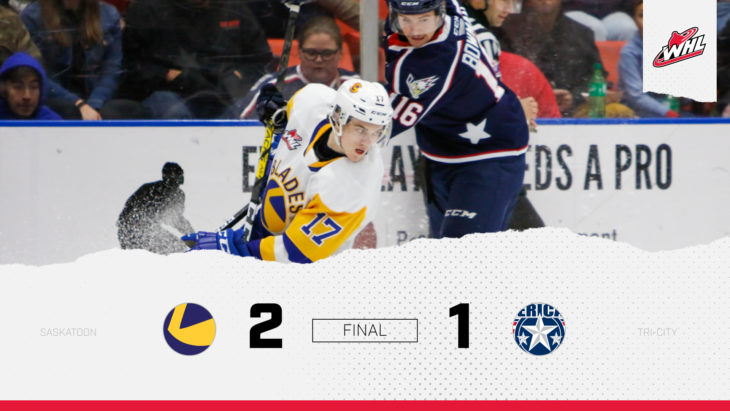 The Saskatoon Blades closed out the U.S. Division portion of their road trip Wednesday with a 2-1 win against the Tri-City Americans.

Victory for the Blades came via goals 30 seconds apart in the third period and a 34-save performance from Nolan Maier between the pipes.

Maier and Beck Warm kept the gates sealed through 40 minutes, combining to stop 45 shots over that span. Tristen Robins would break the deadlock 3:35 into the third, with Nolan Kneen’s goal coming exactly half a minute later.

Booker Daniel broke up Maier’s shutout bid later on in the period, but the Blades would hold the fort and claim the victory in regulation.