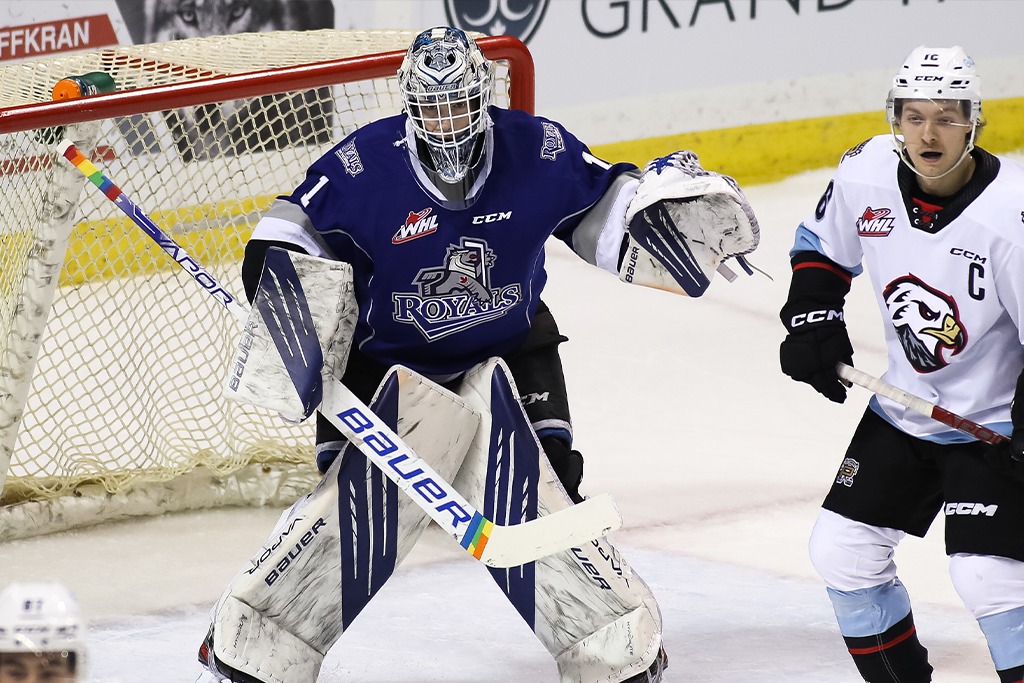 Forward Riley Gannon scored two goals as the Victoria Royals fell 7-4 to the Portland Winterhawks in a high scoring affair at the Save-On-Foods Memorial Centre on Saturday.

The 20-year-old forward ranks second on the team with 12 points, totalling five goals and 12 assists on the season.

The Royals also benefited from multi-point nights by forwards Teague Patton and Jake Poole, both who counted a goal and an assist in the loss.

Meanwhile, starting goaltender Tyler Palmer made 18 saves on 24 shots before being replaced midway through the second by backup Logan Cunningham who stopped 18 of the 19 shots he faced through the final period and a half.

Despite the final result, Royals General Manager and Head Coach Dan Price was impressed by the effort shown by his club tonight, particularly on the offensive end:

“That was a really good game against a really good team,” said Price postgame. “I think we got to their house quite effectively, the chances were about even in that way…o-zone wise, I thought we did a good job of getting the puck below the goal line. It was a physical game, it was a fast game…A lot of good things we can take from that.”

However, Price was quick to admit his team needs to tighten up in the defensive zone if they are to find success moving forward:

“Their [Portland’s] shooting percentage was high,” said Price. “And part of the reason for that was the types of looks they were getting inside our house area, some of those goal line to slot passes…I thought we had the better looks early, Spunar played very well,  made some good saves and they made a couple of good shots early to get the lead.”

Forward Aiden Litke was the top performer for the Winterhawks in the victory, scoring a career-high four points on a goal and three assists. Starting goaltender Jan Spunar also came up big in the win, making 21 saves on 25 shots for his fifth win of the season.

Portland (13-1-1-1) defenceman Marek Alscher (4) kicked off what proved to be a busy first period, scoring the first of three goals for his team in the period to give the visiting Winterhawks the 1–0 lead at the the 8:45 mark.

Victoria  (3-14-3-0) would respond with a goal of their own off the stick of forward Riley Gannon (4) at 9:44 of the frame to even the score at 1-1. Forwards Tanner Scott and Ryan Spizawka would collect assists on the play.

However, the Winterhawks would regain the lead on a goal by defenceman Ryan McCleary (3) at the 10:06 mark, before doubling up their lead on a marker by forward Gabe Klassen (14) at 12:22 to put them up 3-1 heading into the second.

Offence would continue to define the game in the middle frame, as the Winterhawks increased their lead to 4-1 on a goal by forward Dawson Pasternak (3) at the 3:52 mark.

That would be followed by Riley Gannon’s second goal (5) of the night for Victoria at 6:00 of the second to bring the home side back within two. Defenceman Luke Shipley would collect the lone assist on the goal.

Portland would then retake the three-goal advantage on a marker by forward Aiden Litke (4) at the 11:52 mark, before making it 6-2 on a goal by forward Kyle Chyzowski (5) at 13:47.

However, Victoria would get one back at the end of the frame, cutting the Winterhawks lead to 6-3 on forward Jake Poole’s 11th of the season at the 14:30 mark, with forward Teague Patton and defenceman Nate Misskey on the assists.

The Royals would then pull back within two on an early third period goal by Teague Patton (5) at the 11:20 mark. Jake Poole and defenceman Justin Kipke would collect assists on the goal.

However, Portland would quickly snuff out the comeback attempt with a goal by forward Robbie Fromm-Delorme (10) at 15:40 of the frame to bring the score to 7-4, where it would stand at the final horn.

Looking ahead, the Winterhawks will be back on the ice this Tuesday night as they welcome the Calgary Hitmen to Veterans Memorial Arena in Portland, OR.

Meanwhile the Royals will take the next six days off as they prepare for a two-game home set against the Prince George Cougars beginning next Friday, Nov. 18 for 80’s Night at the Save-On-Foods Memorial Centre in Victoria. The Royals will then host a Canadian Armed Forces Appreciate Night on Saturday. Tickets can be purchased at selectyourtickets.com.