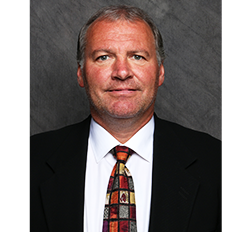 Doug Bodger enters his fifth season as an Assistant Coach with the Victoria Royals.

Last season, alongside head coach Dan Price and fellow assistant coach J.F. Best, Bodger helped guide the Royals to 72 points and a 32-24-6-2 record in 64 games. This was the ninth consecutive year that Victoria clinched a playoff spot.

Bodger joined the Royals for the 2016-17 season as an assistant coach as a member of the coaching staff along with Dave Lowry and Price.

Prior to his time with the Royals, Bodger worked an assistant coach for the Shawnigan Lake Bantam Prep team (2015-16) of the Canadian Sport School Hockey League.

The native of Chemainus, BC also served as an assistant coach for the Cowichan Valley Capitals of the British Columbia Hockey League (BCHL) during the 2003-04 and 2005-06 seasons. During Bodger’s time with the Capitals, they recorded a mark of 63-41-10, and six ties.

The 52-year-old gained international experience as a member of Team Canada at the 1987, 1996, and 1999 World Hockey Championships. Bodger played in 28 games for Team Canada and registered seven points (1g-6a), which included winning a silver medal as a member of the 1996 team.

Previous to his time in the NHL, Bodger spent two seasons with the Kamloops Junior Oilers of the WHL. Over 142 contests, he tallied 190 points (47g-143a) and was named to the WHL Second All-Star team in 1983 and WHL West First All-Star Team in 1984. During the 1983-84 campaign, Bodger helped guide his team to a league best 100 points (50-22-0) as the Junior Oilers captured the WHL Championship and finished third in the Memorial Cup. In his junior career, Bodger played in 24 WHL playoff games and amassed 22 points (2g-20a).