ROYALS AND WINTERHAWKS COLLIDE THIS WEEKEND AT SOFMC 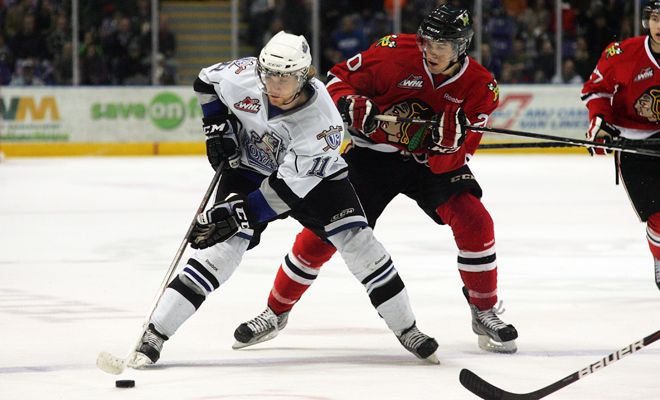 Victoria, BC – After receiving four players back from the recent World Junior Hockey Championships in Sweden, the Portland Winterhawks will visit Save-On-Foods Memorial Centre to face recently-acquired Travis Brown and the Royals on Friday and Saturday. The puck will drop at 7:05 p.m. each night.

Portland holds the second seed in the Western Conference with a 25-12-2-2 record, but this will not be the same team the Royals saw in Oregon last Saturday. Portland will have Team Canada World Junior stars Nic Petan (WPG, 2013 – Second round, 43rd overall), Derrick Pouliot (PIT, 2012 – First round, eighth overall), Taylor Leier (PHI, 2012 – Fourth round, 117th overall) and Matt Dumba (MIN, 2012 – First round, seventh overall) back in the lineup.

Dumba, whose rights were previously acquired in a trade with Red Deer, was reassigned to the Winterhawks by the NHL’s Minnesota Wild on Tuesday and is expected to play his first game in the WHL this season in Victoria on Friday. Portland will also add Brendan Leipsic, who was serving a seven-game suspension, back into the fold. Petan, Pouliot, Leier and Leipsic have accounted for 182 points in 120 games with the Winterhawks this year.

Portland will face a red-hot Royals squad that was named an honourable mention in the BMO CHL Top-10 rankings for the second straight week on Wednesday and is an impressive 8-1-0-1 over the past 10 games. Currently holding the third spot in the Western Conference with a 28-14-0-2 record, Victoria’s 58 points are four more than the Winterhawks’ total, but Portland holds the second seed in the West as the U.S. Division leaders.

The Royals will have a new face in the lineup this weekend after acquiring defenceman Travis Brown from the Moose Jaw Warriors on Monday. Brown, a 6-2, 193 lb blueliner, instantly becomes Victoria’s co-leader in points with his 38 (9g-29a) in his 43 games so far this year. The Winnipeg, MB product was also a fifth round pick of the Chicago Blackhawks in the 2012 NHL Entry Draft.

Brown co-leads the Royals in points with Brandon Magee who has his 38 points (14g-24a) in 37 games this year and has been one of the hottest producers of late for Victoria. Since the start of December, Magee has 19 points (7g-12a) over 11 games played. Axel Blomqvist, another recent addition to the Royals, has been a consistent offensive threat up front since joining the club. Since being acquired in a trade with Lethbridge, Blomqvist has put up 20 points (8g-12a) in 18 games with Victoria.

Friday night is Home Depot Night at Save-On-Foods Memorial Centre! The first 2,500 fans through the gates will receive a pair of hardware thundersticks from Home Depot to help cheer on the Royals against the Winterhawks!

During the first intermission on Friday night, young hockey players from Juan de Fuca Minor Hockey will participate in Tim Bits Minor Hockey presented by 100.3 The Q! During the second intermission, lucky fans will compete on the ice in the Home Depot Paint Roller Race!

Saturday night is Intact Earthquake Awareness Night when the Royals host the Winterhawks once again! Intact Insurance will be in the concourse inviting fans to test their earthquake preparedness at their booth. Intact Insurance will also have promotional flashlights and hand clappers for fans on entrance while quantities last! Select fans will also be chosen at random to compete for earthquake kits during a 90-second time-out trivia game!

We are Royal Blue, are you? 2013-14 season ticket, mini-plan and group packages are now available! To guarantee yourself the best seats at the best prices call 250-220-7889, visit www.victoriaroyals.com, or head down to the Victoria Royals Ticketing Office located at Save-On-Foods Memorial Centre. Kids Club memberships, for fans 12 years and younger, are also available for only $20 and include four child tickets, a t-shirt, newsletters from Marty the Marmot and much more!