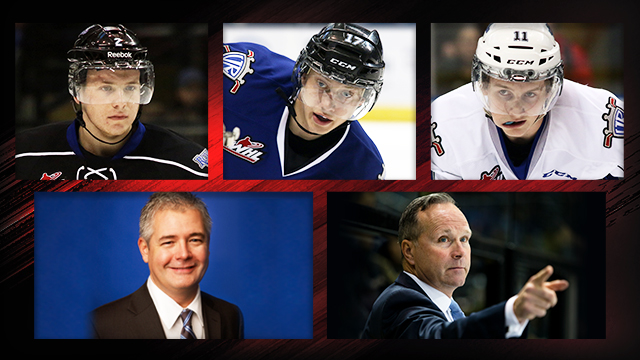 Victoria, BC- The Victoria Royals are pleased to announce that five members of the organization have been nominated for six WHL awards, with two players being named to all-star teams.

All of the Western and Eastern Conference Award winners have been nominated for the league honour at the 2016 WHL Awards Luncheon on May 4th in Calgary, AB.

Player of the Year:

Royals’ Captain Joe Hicketts has been named as the Western Conference’s Player of the Year, and nominee for the WHL’s Four Broncos Memorial Trophy as the league’s player of the year.

The product of Kamloops, BC finished the 2015-16 regular season tied for second in the WHL for assists (53) by a defencemen and seventh in scoring (61 points). Earlier this season, Hicketts set the Royals’ all-time franchise record for most career points by a defenceman (173) and powerplay assists (70).

For the second consecutive year, Hicketts was a member of Team Canada at the World Junior Hockey Championships in Helsinki, Finland. Named as an assistant captain, Hicketts registered three points (1g-2a) in five games during the tournament. Hicketts also took part in the annual Canada Russia Series for Team WHL where he recorded two assists and a +2 rating over two games. He was named captain of Team WHL for Game 2, which took part in his hometown.

The Eastern Conference named Dryden Hunt of the Moose Jaw Warriors as their nominee for player of the year.

Victoria’s Hicketts has also been recognized as the Western Conference’s Top Defenceman and nominee for the Bill Hunter Memorial Trophy as the league’s top defenceman.

Hicketts anchored a Royals’ blueline that finished the regular season with the league’s top defence with a franchise record 166 goals allowed, and a league best 2.31 markers against per game. Victoria also held the second best penalty kill with at 84.2%.

Ivan Provorov of the Brandon Wheat Kings is the Eastern Conference’s Top Defenceman.

Rookie of the Year:

Royals’ 1998-born forward Matthew Phillips was chosen as the Western Conference’s Rookie of the Year and nominee for the WHL’s Jim Piggott Memorial Trophy as the league’s top rookie. Phillips finished the 2015-16 regular season first in points (76) and goals (37) among all WHL rookies. Phillips also finished tied for first in the league in game winning goals (10), and tied for second in powerplay markers (16).

In February, in his hometown of Calgary, AB, Phillips set the new franchise record for most goals in a single season with his 33rd marker. Phillips passed former Chilliwack Bruin Oscar Moller, who scored 32 goals during the 2006-07 season.

The Eastern Conference recipient for Rookie of the Year is Noah Gregor of the Moose Jaw Warriors. Gregor was originally drafted by the Royals in the in the third round, 55th overall, of the 2013 WHL Bantam Draft.

Victoria’s Tyler Soy has been recognized as the Most Sportsmanlike Player in the Western Conference. With the award, Soy has been nominated for the WHL’s Brad Hornung Trophy as the league’s most sportsmanlike player.

Soy wrapped up the 2015-16 regular season second in team scoring with 85 points (46g-39a) and only 27 minutes in penalties. Soy led the team in goals with 46 and broke the Royals’ record for most markers in a single season.

Jake Bean of the Calgary Hitmen is the winner of the Eastern Conference’s Most Sportsmanlike Player award.

Coach of the Year:

Lowry, in his fourth season with the club has guided the Royals to a WHL best 106 points and 50-16-3-3 record. Under Lowry, Victoria was the league’s top defence with only 2.31 goals against per game and the third best offence with 3.90 markers per contest.

In December of this season, Lowry was the head coach for Hockey Canada’s National Junior Team at the 2016 World Junior Hockey Championships in Helsinki, Finland. Lowry was also the bench boss for Team WHL at the annual CHL Canada Russia Series in November.

During the 2014-15 season, Lowry won a gold medal with the Canadian World Junior Team as an assistant coach at the 2015 World Junior Hockey Championships.

Since joining the Royals for the 2012-13 season, Lowry has posted a 162-85-9-8 record with the club. In the 10-year history of the franchise, Lowry holds the all-time record for most wins. He also holds the franchise mark in playoff victories with 12.

The Ottawa, ON native has also collected a 221-94-12-9 career record during his time as a head coach in the WHL with the Royals and Calgary Hitmen (2008-09). Earlier this season, Lowry became only the 43rd Head Coach in the 50-year history of the league to reach the 200 win benchmark.

Brent Kisio of the Lethbridge Hurricanes is the Eastern Conference winner for Coach of the Year.

Executive of the Year:

The Edmonton, AB native is in his fourth season as the club’s general manager. Hope is the second general manager in Royals’ history and the fourth in the Victoria/Chilliwack Franchise.

The Royals’ Hicketts and Soy have been named to Western Conference’s First and Second All-Star Teams respectively.

Soy has been named to the Western Conference Second All-Star Team for the first time in his career.

The Royals will have home ice advantage and will play the Spokane Chiefs in the first round of the 2016 WHL Playoffs with Games 1 & 2 on Friday and Saturday. Single game tickets for the playoffs are on sale now at the Select Your Tickets Box Office located at Save-On-Foods Memorial Centre, over the phone at 250-220-7777 or online at www.selectyourtickets.com.