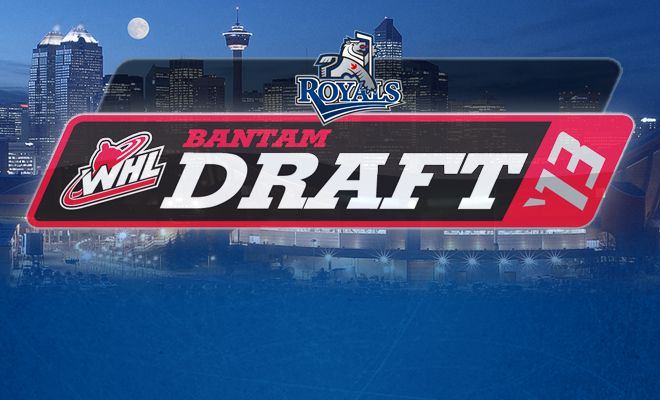 Calgary, AB – The Victoria Royals are proud to announce that they have selected 11 players in the 2013 WHL Bantam Draft.

Of the 11 players drafted by the Royals, three hail from British Columbia. Alberta contributed four players, while the United States supplied two (Nebraska and Minnesota) and both Saskatchewan and Manitoba provided one player each. By position the Royals picked up seven forwards and four defenceman.

“We’re very happy, it was a fantastic day,” Director of Player Personnel Grant Armstrong said. “Coming in we tried to address the skill component, and we did that. At the same time we looked for intelligence and the players that we have coming to draft camp are all very highly qualified, smart, skilled players.”

The Royals used their first pick, 11th overall, to select Dante Hannoun from the North Shore Winter Club Hawks of the Pacific Coast Bantam Hockey League (PCBHL). Hannoun, a 5-6, 145 lb centre skated in 63 games and amassed 151 points (63g-88a) and 46 penalty minutes to go along with a +114 rating. The Delta, BC native also helped lead his team to the 2013 BC Provincial Bantam Tier 1 Championship and a second place finish at the 2013 Western Canada Bantam Championship.

“We are very happy to have chosen Dante with the 11th overall pick,” General Manager Cameron Hope said. “Dante is a dynamic talent who plays with intensity and he sees the ice as well as anyone in the game. He’s an intelligent player who can finish and makes his teammates better.”

With the 33rd pick of the draft, the Royals selected Calgary, AB resident Matthew Phillips. During the 2012-13 season, Phillips with the Calgary Bisons of the Alberta Major Bantam Hockey League (AMBHL). The 5-6, 130 lb winger appeared in 37 games for the Bisons and scored 77 points (40g-37a) to go along with eight minutes in penalties.

“Matthew is a player with great upside,” General Manager Cameron Hope said. “He has a high motor, he’s tenacious and he’s offensively talented. At the same time Matthew also plays a 200-foot game.”

Victoria used their second pick of round two to take defenceman Ralph Jarratt 37th overall. The 6-1, 165 lb rearguard from Grand Prairie, AB played with the Pursuit of Excellence Bantam AAA team where he tallied 29 points (3g-26a) and 66 minutes in penalties in 28 games.

“Ralph is a shutdown defenceman with great potential,” Director of Player Personnel Grant Armstrong said. “Ralph has a good stick and is a strong skater that can play in all situations.”

The Royals used the 55th overall selection to pick 5-9, 150 lb winger Noah Gregor. The native of Beaumont, AB played with the Leduc Oil Kings of the AMBHL and collected 68 points (43g-25a) to go along with 64 penalty minutes last season.

“Noah is a strong player that skates very well,” Director of Player Personnel Grant Armstrong said. “Noah can be physical and also has good puck skills. He has the tools to be a successful player in the WHL.”

With the 75th selection of the 2013 WHL Bantam Draft, Victoria selected defenceman Blake Jameson. The product of Brandon, MB suited up for the Brandon Wheat Kings of the Winnipeg Bantam AAA League. With the Wheat Kings, the 6-1, 166 lb defender scored nine points (1g-8a) to go along with 12 penalty minutes in 25 games.

“Brayden is a skilled player that makes things happen in the offensive zone,” General Manager Cameron Hope said. “Brayden skates well and is tenacious on the puck.”

With their third selection of the fourth round, Victoria drafted Jared Dmytriw, 83rd overall. Dmytriw, who hails from Craven, SK, skated with the Prairie Storm of the Saskatchewan Bantam AA Hockey League (SBAA). The 5-9, 150 lb forward amassed 64 points (37g-27a) and 54 penalty minutes in 37 games with the Storm.

“Jared is a highly competitive player,” Director of Player Personnel Grant Armstrong said. “Jared is a quick skater with vision and a good shot that has shown the ability to finish the chances he receives.”

Ethen Frank from Omaha, NE became the first American-born player selected by the Royals with the 84th overall pick. A 5-11, 164 lb forward, Frank played with the Omaha AAA 16U team of the North American Prospects Hockey League (NAPHL) where he notched 23 points (8g-15a) and six penalty minutes in 22 games.

“Ethen has top-end talent,” Director of Player Personnel Grant Armstrong said. “Ethen shows poise with the puck and good hockey sense. He has also shown the ability to compete and standout against older players.”

With the Royals ninth selection of the draft, 99th overall, the team took defenceman Matt Hellickson. The native of Rogers, MN laced up for the Rogers Royals of the Minnesota High School Hockey League. With the Royals, the 5-10, 155 lb rearguard collected 11 points (4g-7a) and 23 penalty minutes in 25 games.

“Matt is a mobile defenceman with good skills,” Director of Player Personnel Grant Armstrong said. “Matt skates well and has a quick, hard shot. We think Matt has good upside in his game.”

Victoria grabbed forward Ty Westgard with the 165th selection in the 2013 WHL Bantam Draft. The 5-11,163 lb forward from Surrey, BC played with the Semiahmoo Bantam A1 team of the PCBHL team where he potted 117 points (51g-66a) in 47 games.

“Ty is a hard working leader,” said General Manager Cameron Hope. “Ty was the captain of his team. He handles the puck well and has the potential to be a good offensive player in the WHL.”

With the 187th selection of the 2013 WHL Bantam Draft, the Royals drafted defenceman Carter Stephenson from West Vancouver, BC. The 5-11, 155 lb defender played with Hollyburn Bantam A1team of the PCBHL.

“Carter has good instincts on the ice,“ Director of Player Personnel Grant Armstrong said. “Carter makes good first passes and is a good skater that possesses balance and edge control.”

The WHL Bantam Draft is an annual outing, in which the clubs of the Western Hockey League select players who have graduated from bantam. The draft’s order of selection depends on where the team finishes in the League standings. The clubs that miss the playoffs are placed into a lottery for the first round only. After the first round, the clubs select in order from fewest to most regular season points.

During the bantam draft, players from the four Western Provinces and the states of Alaska, Arizona, California, Colorado, Hawaii, Idaho, Kansas, Minnesota, Montana, Nebraska, Nevada, New Mexico, North Dakota, Oklahoma, Oregon, South Dakota, Texas, Utah, Washington and Wyoming are eligible to be selected. For the 2013 bantam draft, players born in 1998 may be selected.

Here Comes the Blue! Season ticket packages for the 2013-14 season are on sale now! Call 250-220-7889, visit www.selectyourtickets.com, or head down to the Victoria Royals ticketing office at Save-On-Foods Memorial Centre for more information.