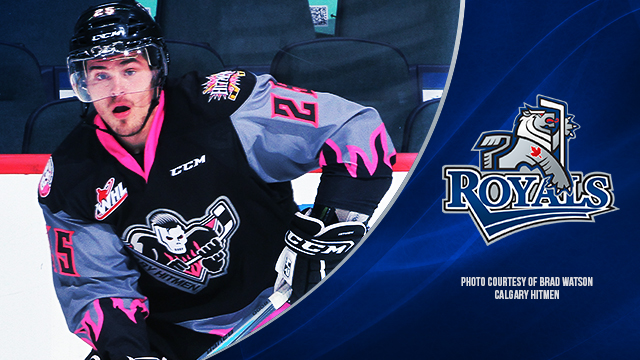 A native of Sherwood Park, AB, Chase was most recently with the Calgary Hitmen where he recorded 15 points (2g-13a) in 15 games. Previous to that he spent time with the Oklahoma City Barons of the American Hockey League and registered one goal in five games.

Last season Chase finished tied for first in team scoring and goals for the Hitmen with a career high 85 points (35g-50a) in 70 games.

Chase was drafted by the Edmonton Oilers in the seventh round, 188th overall in the 2013 NHL Entry Draft and signed a three-year entry level deal with the Oilers this past September.

“Greg Chase is dynamic and skilled player who can provide offense at an elite level in this league,” Royals’ General Manager Cameron Hope said. “We are looking forward to his arrival.”

Chase was one of 41 players to attend Canada’s National Junior Team Summer Development Camp with a chance of representing Canada at the 2015 IIHF World Junior Championships. He has also played for Team WHL vs. Team Russia in the past two SUBWAY Series (2013 & 2014). In 2013, Chase scored two goals in a 4-2 victory over the Russians.

The 6-0, 188 lb center has spent his entire WHL career (2010-2015) with Calgary where he has registered 177 points (60g-117a) in 219 games. Chase brings with him playoff experience after he played in 28 playoff games over three seasons with the Hitmen and tallied eight goals and 13 assists for 21 points. The Hitmen selected Chase in the first round, 22nd overall in the 2010 WHL Bantam Draft.

Going to the Hitmen is 1995-born defenceman Kanzig. In 21 games for the Royals this season he has registered six assists. The 6-6, 242 lb defender has spent his entire WHL career (2011-2015) with the Victoria Royals, recording 23 points (3g-20a) in 217 games played. Kanzig has also appeared in 17 games in the WHL Playoffs where he has scored two points (1g-1a) and posted 35 minutes in penalties.

“Saying goodbye to Keegan is especially difficult,” Hope said. “He has been a big part of this team since the franchise drafted him. We can’t thank him enough for his contributions to the Victoria Royals, on-and-off the ice and we wish him every success.”

Kanzig was selected by the Calgary Flames with the club’s third round, 67th overall, pick in the 2013 NHL Draft to become the highest drafted player in Royals’ team history.

The Athabasca, AB native was selected by the Chilliwack Bruins in the 2010 WHL Bantam Draft in the first round, seventh overall.

The Royals continue their four games in five night homestand Friday against the Everett Silvertips and Saturday vs. the Regina Pats for Canadian Forces Night. Puck drop for all three games is set for 7:05 p.m.

Can’t make every game? Consider our “Any-time” voucher packs. Starting at just $90 for six vouchers, you’ll love the flexibility and convenience of redeeming your vouchers when you want, for which game you want. Packs are available in all price levels at the Save-On-Foods Memorial Centre. Get more details by calling 250-220-7889 or visiting at www.victoriaroyals.com.